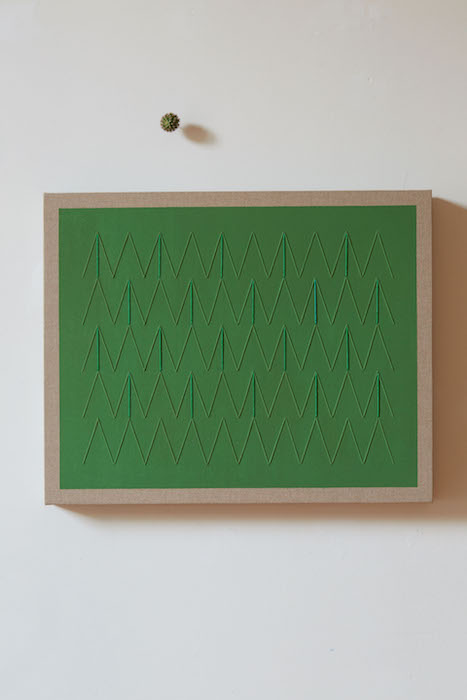 "These works are my personal "punishments" since they generate a certain sense of fatigue for me. They surmount a large amount of energy in order to complete a simple repetitious gesture" - Lorenzo Taini

“A floating quality of painted canvases and wall installations has immediately shown a common foundation: repetition. The same concept transcends the object. When repeating a symbol what feature prevails: the repetition itself or the characteristics of a symbol? Hume taught us that repetition doesn’t alter what is being repeated, but it changes something in whoever observes the repetition. Of course, there is a difference between lines and erasers, but in art, the real difference lies in the intention. Taini doesn’t realize that he is acting in two worlds when he aligns the lines and erasers. What excites him is a geometry of order in the series, creating sequences that have continuity and persistence. He achieves this with a certain lightness, avoiding accumulation or turning repetition into an extension.” - Giovanni Maria Accame

Lorenzo Taini (b.77) is based in Milan, Italy, and trained in the studio arts at the Accademia di Belle Arti di Brera. He is known for creating minimalist sutured works on canvas, works on paper, and assembled installations that explore the themes of continuity, fragility, and recurrence. Lorenzo started his career as an apprentice to such art critics as Francesco Lionetti, Ermanno Krumm, Marco Meneguzzo and Giovanni Maria Accame. His texts and critiques have been published in Flash Art, Arte e Critica and other art publications. Taini has also worked with such modern abstract painters as Grazia Varisco, Claudio Olivieri, Carla Accardi and Eugenio Giliberti.

2014 Save And Safe, Palazzo Crespi, Milano