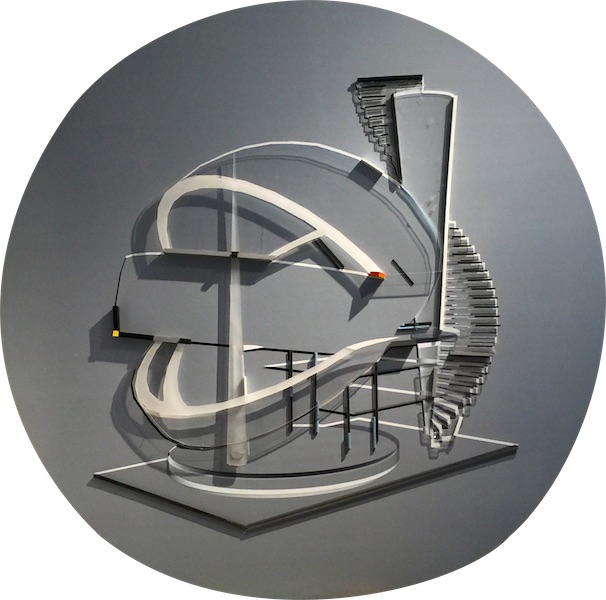 "The arrival from the past to the present moment, the refuge ... The staircase without any destination like the future, absolutely uncertain."

The Artist is inspired by pyramids and cenotaphs, tempiettos and towers, triumphal arches and commemorative obelisks, shrines, observatories, Herron`s "Walking cities" or "Invisibles" from Calvino, fantastic predictions of Jules Verne and the " arkitektones " of Kasimir Malevich

Fabian Tanferna ( b. Buenos Aires, 1963) is an architect and designer. Throughout his long career, Fabian has participated in countless individual and group exhibitions around the world. One of his most notable installations "Small Monuments" was a part of "III Bienal Internacional de Arte Contemporáneo del Fin del Mundo" in 2011. Since then, he has been exhibiting his series "Small monuments" extensively. Fabian won the "First Prize acquisition" of the Municipality of the city of San Isidro, Buenos Aires in 2013.

Below is Artist's Statement for Fabian's series for Spotte

"It is said that the monuments are mainly architectural works of a justified artistic, historic or social value, bearing a message from the past of each nation and living testimonies of its secular traditions.These structures that were erected in memory of a character or an important event and have come to understand any historical construction, have been and are to me, objects of observation and interest grounds. An obelisk ... Does it seduce so strongly that the shape does not need to be tied to its function? A paperweight or a pyramid ... Could it be that by recognizing a geometric form we are transferred back in time, exploring remote areas, often unknown and even imaginary? Note that when the "object” has no parameter to compare it to, we can wander eternally from a minuscule scale to a monumental without any restrictions. No scale means freedom to choose the size of this object ...and the adventure this selection will unravel.

Be willing to give secrets a chance.

"Small monuments" is, simply put, a collection of memories, readings, and feelings that come and go as forms of expression of imagination itself ... Drawings, sketches, ideas, situations in dreams ... A sum that allows from buildings and nonexistent spaces to literary imagination disappearances, a tribute, a memorial, or ... a license for fantasy.