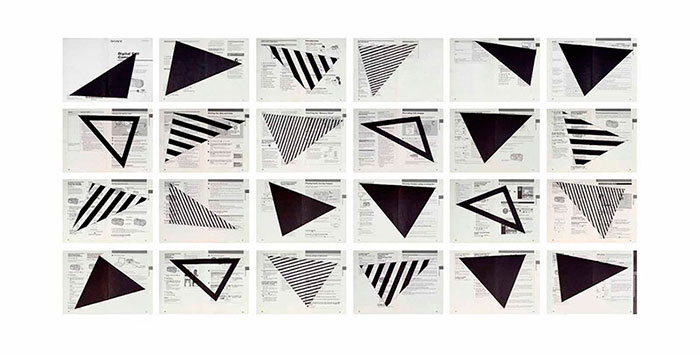 This selection of drawings includes different illustrations I explored between 2009 and 2013. They are characterized by the use of geometry as a human language for summarizing reality, taking it as a visual resource to describe the truth. Some of the works are direct experiments of forms and shapes, others are attempts to codify and reconfigure numerical databases constructed observing people walking on the street. All of them are orbiting ideas of human presence, our perception of reality and random chance.
- Ernesto

Based in Monterrey (MX). His artwork is characterized by the exploration of chance and abstraction as a way to encode and visually translate the reality around us, looking for links between what is accidental and what becomes significant. His academic formation stems from the field of humanities, with a bachelor degree in International Relations recieved in 2006.

Ernesto already has had 9 solo exhibitions under his belt and 31 group exhibits, including international shows in London, Brussels, Luxemburg, Athens, Switzerland, Argentina and the United States. Some of his artworks are part of art collections in Italy, England, United States, Canada, Argentina and Mexico.

He is 1st place winner of the Saatchi Gallery Drawing Showdown 2011, recipient of the PACMyC fellowship given by the Arts and Culture National Council of Mexico (CONACULTA), as well as the FINANCIARTE production fellowship given by the State Arts Council (CONARTE). He is currently an on-staff professor at the School of Art, Architecture and Design at the Tec de Monterrey College since January 2011.