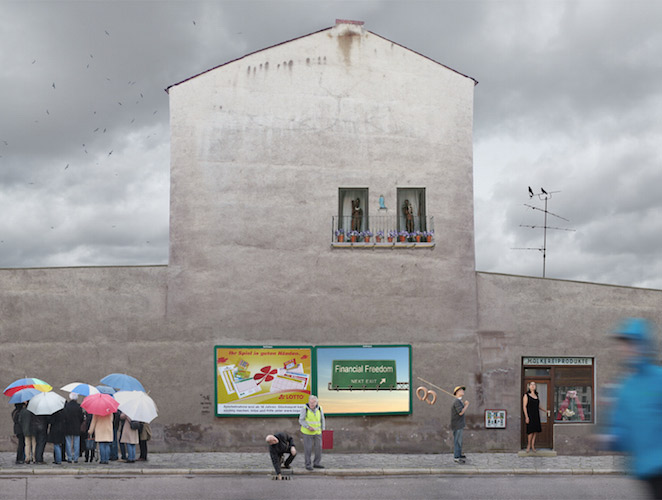 It is a peek into our world.

Snapshots of an urban life - seemingly mundane and banal.

At first glance you can see something familiar - like an everyday scene that everyone knows.

It could be a street scene, recorded as a snapshot.

And yet there is something in these pictures that irritates.

The people exist in a certain tension to each other that forces a more detailed examination.

Each person in these pictures has a life of their own that requires our observation.

What does each individual person do? Where have they come from, or where are they going to?

With whom do they interact? What do they stand for? What is their meaning?

Something else seems to be happening that is not declared within the image.

Only through the reactions of the ‚passers-by‘ do we notice it.

This is ultimately the only connection - the only thing that the people have in common.

just random passers-by? - occur and act. These are the places that leak original, urban vitality.

The images reflect the everyday in novel narrative threads.

The images invite us in to participate and reflect.

Michael W. Fuchs grew up in Stuttgart. He studied drawing and graphic design and later got a photo training. Michael moved to Berlin to become a painter in 1980. Michael worked as a set designerat the municipal Theater of Nürnberg in 83-84. He then continued his work in Berlin. He has lived in Munich since 1986, where he works as a freelance photographer and guest lecturer at the University of Applied Sciences and School of Design in Munich.

"After my school years and several trips to the Middle East, Asia, and South America, I pursued photography as an independent self study. I learned the craft when I worked as an assistant to many established photographers. Besides photography, there were always "detours“ of my interests into painting and stage design. Yet I would always come back to photography, again and again, until finally I decided to establish a photo studio in Munich.

Over the years I worked for advertising agencies and publishing houses. I did everything from still life anf reportage to reports, people, and fashion. In the last few years I have also worked as a lecturer at the University of Applied Sciences, Munich and the School for Design Munich. In the meantime, I moved away from commercial photography in order to be engaged with free projects and topics. After more than 20 years of commercial photography, it seemed a logical step to change perspective as a way to further the evolution of my photo work."