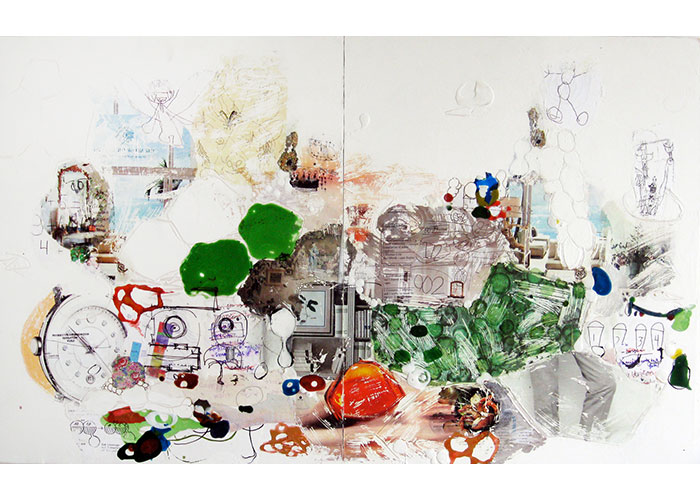 In my paintings I merge various unrelated media into a unified picture - a free flowing record of open creative process over time that calls into question dualities such as flatness and perspective, internal and external, past and future. The imagery often alludes to natural processes of regeneration such as germination and mitosis.

I start by creating a thickly sculpted gesso ground that I gouge into and upon which I build a collage of found lists, doodles, diagrams and other personal notations mostly made by others. The notes are from the past but are often plans, diagrams or reminders of something to be done in the future.  I then use various media including photo transfers, acrylics, and venetian plaster to create layers of organic and architectual forms that flow in and out of each other revealing recognizable and semi-recognizable images and words. The resulting layered web evokes potential energy inviting one to make synaptic connections in a journey through space and time.

Thomas Huber grew up in Buffalo. He moved to New York to attend The School of Visual Arts, where he stayed after graduating in 1986.  He began working with performance artist Yoshiko Chuma as a performer and musician, and performed in her piece “The Housing project”.  This led to several music projects where Thomas played guitar and bass, most notably the infamous “House-O-Pork” who performed throughout the nineties at such various venues as PS 122, La Mama, Hallwalls, Jacob’s Pillow and King Tut’s Wah Wah Hut.

Throughout this period Thomas continued to make paintings, which increasingly became his focus. In the late nineties he began showing his work in New York, represented by Pacifico Fine Arts from 1999-2002. In 2000 he moved to the Hudson Valley, and eventually began showing in Beacon and around the Hudson Valley particularly at the Van Brunt Gallery. He has curated shows at the Garrison Art Center, in Garrison, NY including the highly regarded “Salon des REfUSE”. His work has been shown throughout the US as well as in Montreal, Canada and Naples, Italy.