CS GO skins differ in terms of rarity and wear. Now there are 7 grades of rarity (from consumer goods to extremely rare), as well as 5 types of wear (from battle-hardened to samples straight from the factory). In addition, there is a special kind of StatTrak skins equipped with a kill counter. The cost of skins on the website https://esportzbet.com/gg-bet depends on their rarity and wear parameters. A used consumer goods level weapon will cost an average of $ 0.03 to $ 0.3. While the rarest barrels without signs of wear can cost about $ 1,700, like the M4A4 Howl special forces assault rifle. The main purpose of skins is to replace the appearance of weapons with a newer one that differs from the standard one. Weapon skins affect only the appearance of equipment and do not affect its characteristics in any way. For example, the standard model of the AWP sniper rifle will have exactly the same characteristics as one of the most expensive skins - AWP Dragon Lore, the price of which can go up to two thousand dollars. From this it should be concluded that skins do not affect the gameplay in any way, and also do not provide any advantages. A logical question is brewing: why do we need skins? It's simple - skins dilute the game with new colors and make it look new. In addition, weapon skins are collectibles that create a kind of in-game economy that brings additional income to Valve and skin creators. Among other features of the new skins, it should be noted that they increase the interest in the game, which leads to a significant increase in online at the time of the release of new sets of equipment.

Founder and Director at Spotte Art 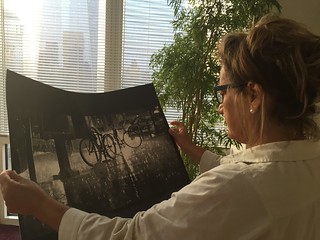 Nelba Delmedico is a curator and an art adviser. She received her BA in Economics from The National University of La Plata.

Being in the art world for over 25 years, she has a secondary market practice in the acquisition and deaccessioning of Modern, Contemporary and Latin American art - with an expertise on Modern and Post-war masters- on behalf​ of private and public collections.

She also curated and organized seasonal exhibitions for mid-career and emerging artist on Spotte Art, an online boutique platform that was founded in 2013. As a natural consequence of her curated online exhibitions she began a consulting practice in which she shares her expertise with interior designers and Hospitality industry, with a mission to make high-quality artworks accessible to a variety of community spaces.

Veronica Mijelshon is a curator, an interior architect and art consultant. In 2017, she began to collaborate with Spotte Art. She has a broad expertise and in-depth knowledge of the visual arts, textiles and furniture.

Previously, Veronica has worked with art consultant Joyce Pomeroy Schwartz and various restaurants, and contemporary art galleries. She also served as the director of NURTUREart Gallery and the founder and director of the art space 0.00156 acres in Boerum Hill, Rox dedicated to showcase art engaged in current events.

Veronica was born in Argentina, where she earned her Master's degree in architecture at the University of Buenos Aires. Veronica lives in Brooklyn, NY.